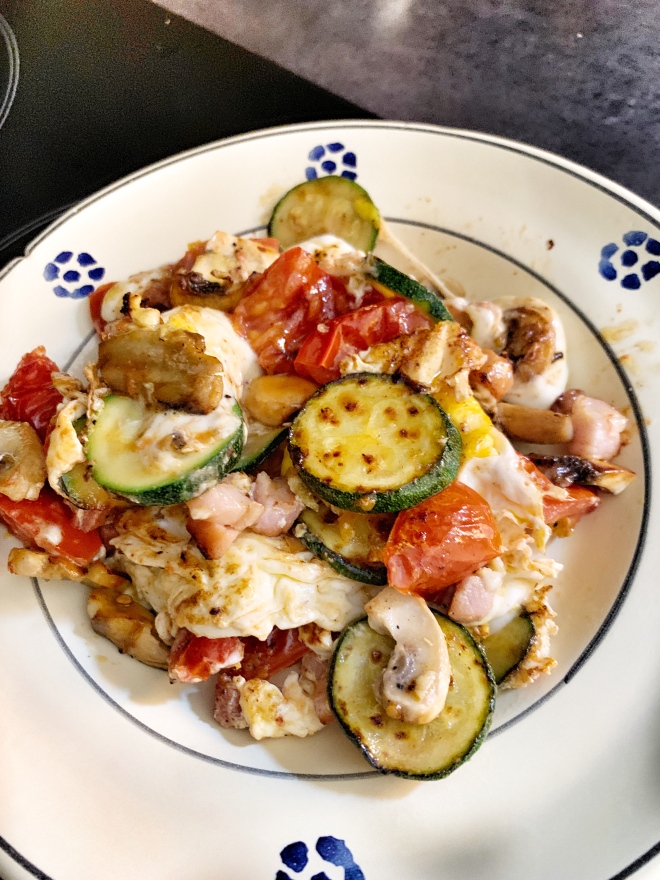 In cooking you’ve got to have a what-the-hell attitude.
~ Julia Child

I love to cook, and I have Julia Child’s attitude toward cooking: I throw together what I think I want to eat and hope that it tastes okay. When I’m in alone in Italy, I tend to cook lunch for myself (or for Mike and me if he’s with me). I crave things I don’t get a lot here, and I’ll head to the market and get what I want to prepare that day. A lot of times, I combine vegetables, a little meat, a little cheese, and maybe pasta for a simple meal. It might not look the greatest, but since I’m not cooking for anyone other than myself while I’m in Italy, presentation is not my main concern.

Today, for example, I’ve been craving eggs, and since the markets here sell eggs in packages of two, four, six, etc., I bought two the other day. I also bought a few tiny tomatoes, zucchini, a mushroom (yes, one), and a little diced pancetta.

I chopped the tomatoes and sliced the mushroom and zucchini and sauteed them in a little olive oil.

When they got soft, I added the cubed pancetta. (Side note: People usually call pancetta an Italian bacon, but in Italy, it is a type of salami. A salt-cured cut of pork belly, pancetta can be served raw (thinly sliced) as part of an appetizer or cooked to add a depth of flavor to a recipe. You can buy it rolled or flat, sliced thin or thick, or even cubed.)

Once everything was browned enough, I broke my egg on top. I wanted it to cook all the way through without having to turn it, but I couldn’t quite get it to do what I wanted.

A photo of my finished lunch is at the top of this post. It might not look like much, but it tasted good. I decided that tomorrow, though, I’ll cook the remaining veggies and pancetta and have them by themselves.