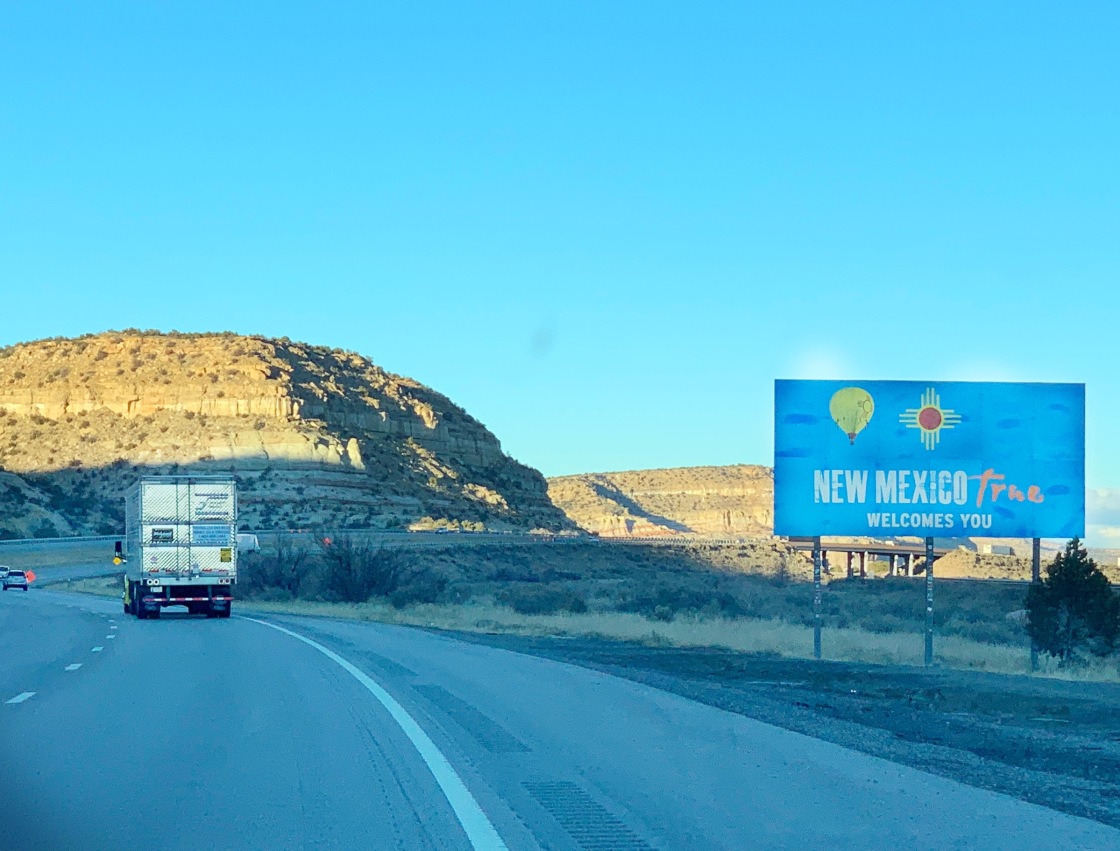 Would you tell me, please, which way I ought to go from here?
That depends a good deal on where you want to get to.
~ Lewis Carroll

The drive from Las Vegas to Albuquerque takes about eight hours, but we decided to drive 10 hours (plus two for stops) and stay Saturday night in Santa Rosa, New Mexico.  A small town of 3000 residents, it straddles Interstate 40 which, we decided, was the reason it had a Starbucks and a McDonald’s. It also has several chain hotels, including the La Quinta I had booked.

Because we’re traveling with the Little Dude, I had to book hotels that are dog-friendly. More often than not, we stay at LaQuinta because we have had good luck with them. The one in Santa Rosa was, shall I say, just okay. I decided to check the reviews of the one I had booked for Little Rock before we left yesterday morning, and the most recent reviews were less-than-kind. Since we were staying two nights, we decided to look for another hotel before we took off so that I wouldn’t have to try to do it with just my cell phone.

Once I found and booked the new hotel, we took off for Little Rock which was 10 hours (plus the stops) east of us.

The drive took us through the rest of New Mexico and into the panhandle of Texas. Adrian, Texas, which sits just inside the Texas state line, is home to the Spinning Spur Wind Farms I, II, and III. I took the photos of the windmills to give you an idea of the wind farms in Texas, but I have to admit that the photos do not do justice to the number of windmills that border the interstate. Spinning Spur covers more than 18,000 acres.  Imagine that that is just one wind farm. Texas has almost 100,000 windmills on farms in the entire state, and they use them for electrical and water power. At times last winter, the windmills supplied between 40-50 percent of electrical power in the state.

What amazes me most about driving Interstate 40 is watching how the landscape changes so quickly. We left the hills of New Mexico, and the land almost immediately flattened out for miles and miles and miles. Oklahoma was the same. There is beauty in all of it.

As he did on Saturday, the Little Dude constantly pestered us to allow him in the front seat.  Unless you have tried to keep him in the back, you have no idea how strong he is and how hard-headed he can be. That, however, is a story for another day.

Tomorrow, we’re on the road again. See you in Nashville!