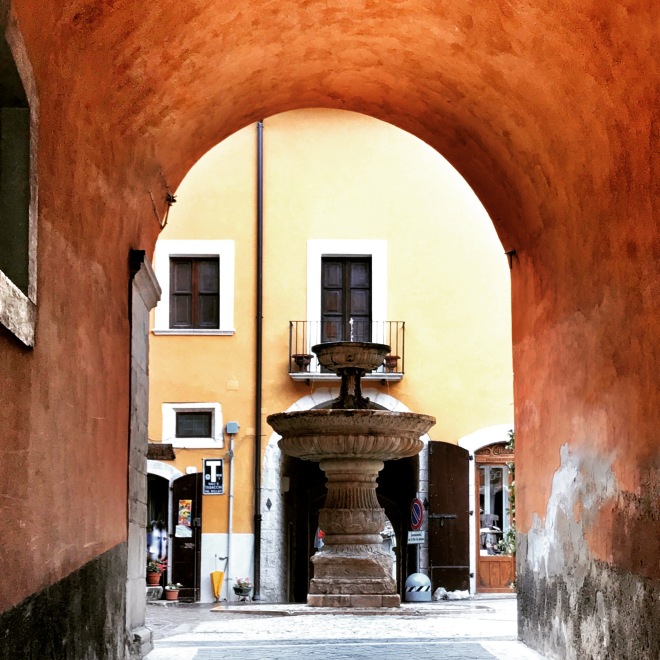 I mentioned yesterday that I’m always questioning. It drove my mother nuts.  When I was little and pretty malleable, we had a pretty calm relationship. When I started questioning things, she—and my father when he was alive—were not too happy with me, and if it had to do with religion, watch out, Nelly. One day I happened to mention that it was horrible that a nun had told us (as we were about to make our First Communion) that the host was the body of Christ, that we should not let it touch our teeth, and *if* we bit into it, blood would spurt out. Consider my position on this.  We were in second grade, and some honking truck of a nun tells our class that we dare not bite the host at risk of having blood all over us. Not only was it not true, it was a ridiculous lie to tell seven- and eight-year-old kids. I was in eighth or ninth grade when I decried the scare tactics, and you would have thought I had killed the Pope himself.  “CHRIST ALMIGHTY,” my devout father screamed. “YOU WOULD QUESTION GOD HIMSELF.”

Truth is, I wouldn’t mind interviewing Him, and after I got through shaking and all, we’d probably have a great talk. He might even enjoy my questions because we’re all made in his image, so some part of Him must be questioning things: Why did I put stingers on bees?  Maybe I should re-think this earthquake business.  Why did I let them discover the atom?

At any rate, instead of answering questions I had, that first trip to Pettorano just produced more:  Who was Cesidio Berarducci?  Did I have more cousins in Pettorano? Why did people close up when I mentioned Crugnale? Who was my grandmother’s mother? How did my grandparents meet? When did they marry?  Where? What did these people do in their lives? Who else is a relative of mine? WHO? WHAT? WHERE? HOW?

The Cesidio question was the easiest one to answer. Grams never really talked about Grandpa or his family to me, but one of my uncles had done a family tree. On it, he had mentioned a “Chester” Beraduce, but he had no dates or children listed. In Italy, I didn’t put the two names together at first because I guess I assumed Chester lived in the States and had died either before I was born or shortly after.  I also had no idea that “Cesidio” translates to “Chester” in English. I was right that he was in the States and had died before I was born. My great-uncle had apparently come over to the US at one point, but he didn’t like it and returned to Italy sometime before World War I.  He married Costanza, had one child and was expecting the second when WWI started. He didn’t make it home, and Zia Costanza gave birth to a boy, Cesidio, who grew up in the same house as my grandfather and became the guardia in the comune.

All well and good, but no matter how much digging I did, I was still at a disadvantage because I could not find many documents in the first place, and what few I found that were in Italian, I could not understand. I had every intention of going back to Pettorano, but I also had every intention of studying Italian before I did so. And, as luck would have it, UNLV was offering Italian 101 in early 2011.

I wasn’t quite sure what to expect when I took that first Italian class, but having majored in, done graduate work in, and taught Spanish, I thought that the two would be almost identical. Wrong. Some of the pronunciations are similar; some of the words are the same or very similar; and some of the grammar rules resemble each other.  The two-hour Saturday class was less-than-enough to help me learn much, especially because the instructor spent the first hour talking about Italian politics in English. The second hour, she taught us some vocabulary and grammar, but she would spend a lot of time on letting someone who did not know how to correctly pronounce something try to get it.  As an example, one afternoon, the instructor  asked us to read answers to one exercise, and one guy in the class could not pronounce one of the words. It was a pretty simple word—tabacchi. The correct pronunciation is ta-BACK-ee, but the poor guy could not get it right.

Apparently he didn’t understand the “repeat” command because he came up with yet another pronunciation of whatever word it was.  She spent more than five minutes on the one word with one guy while the rest of us tried not to scream. (Okay. Maybe that was just yours truly trying not to scream.) I guess she didn’t want to embarrass people by calling them out and calling on someone else, but after 12 weeks, I knew how to ask how someone was, how to ask for a train or bus ticket, how to order dinner in a restaurant, and how to ask for directions to my hotel. I also knew the instructor hated Berlusconi and that she thought  the Italian government was going to hell in a hand basket.

If you have everything you need, it will be simple.

At break, I waited impatiently to speak with the instructor about her citizenship revelation.  I wanted to know what I needed to have to see if I were eligible.

“It’s easy,” she assured me.  “You need your grandparents’ and your parents’ birth certificates.”

“I just got my grandparents’ birth certificates in Italy last September.” I was beyond excited at this point.

“Bring them in and let me see them next week,” she told me. “If you have everything you need, it will be simple.”

I should have know her definition and my definition of simple were a little different.