A Weekend at The Emerson Inn, I

I heard or seemed to hear the chiding Sea
Say, Pilgrim, why so late and slow to come?
Am I not always here, thy summer home?
~ Ralph Waldo Emerson

As you may recall, I was home little more than 48 hours after spending 15 days in Alaska when I boarded a non-stop red-eye from Las Vegas-to-Boston. Weary and still fighting a sinus infection due to my time in the great outdoors, I stumbled off the plane just before 8 am, rented a car, and headed north to Rockport.  What should have been a short 48-mile drive took me almost two hours since I got lost due to fatigue, fits of sneezing, and forgetting that I could have used the GPS on my iPhone.  (That tale of woe adventure is here.)  When I finally pulled into the parking lot behind the Emerson Inn (formerly Emerson Inn By The Sea), I needed peace and quiet.

Carol Earle, the guest services manager at the Emerson greeted me when I swung into the office at the inn.  I could tell she was a bit uncomfortable because my room wasn’t ready, but I really didn’t expect it to be.  I was there before official check-out time, before my appointment with Krysten Reilly (the general manager), and way before official check-in time.  All I wanted to do at that moment was sit and watch the grand expanse of water meet the sky while I listened to the waves.

The back porch of the Emerson overlooks the Atlantic Ocean at Pigeon Cove .  I had intended to do a little work while I sat there, but I spent a good half hour just rocking on the chairs and breathing in sea air.  I’m sure Carol was worried about me because she checked on me a few times, and I finally went in when the wind got a little chilly.  Carol offered me coffee or tea—which the inn keeps in the parlor for guests throughout the day, and I settled down at what was to become my “office” for the next few days.  By the time Krysten joined me, sitting on that porch and in that window had both calmed and energized me. . .and I hadn’t even seen my room.

Located on Pigeon Cove in Rockport, Massachusetts, the Emerson Inn is the only historic grand hotel on Cape Ann.  Dating to the early-19th century, the inn started out as a tavern located a little closer to Downtown Rockport.  When 200 townswomen decided to destroy all of the liquor in town in 1856, the owner began running an inn to accommodate the travelers who had discovered the beauty of the area.

One such traveler was Ralph Waldo Emerson. Henry David Thoreau brought him to the area for a hike along the coast (Note: A pedestrian trail still exists.), and Emerson fell in love with Pigeon Cove. For several years, he brought his family to the inn for vacation, and if you read his poetry, you’ll see the influence the area had on him.

Subsequent owners moved the original inn to its present location and enlarged it for use as a boarding house (1871-1911). (Side note: If you look at the photo at the top of this post, you can see the two parts of the inn.  The original inn consisted of the three-story building to the right.  The four stories on the left are the “new” addition.)

In 1911, new owners turned it into The Edward Hotel and had the first telegraph, gas, electricity, and telephone service on the cove.  Over the years, the inn had several changes in ownership and style.  In the 1965, the owners christened it The Ralph Waldo Emerson Inn after its famous client.  Room 207 (right) still stands in homage to the great writer.

Fast forward to 2015 when The Migis Hotel Group bought the inn and closed it and the restaurant to renovate and rejuvenate the property.  While they retained the historic feel to the inn, they got rid of the dark colors, dated wallpapers, aging carpet, and heavy drapes and replaced them with soothing paint colors, white moulding, refinished wood floors, and shades.

The inn has 36 rooms of varying sizes and views (six categories). Painted a calming grey with white trim, each room has a private bath (shower and tub), hair dryer, telephone, cable, free WiFI, air conditioner, and reading chair.  Rooms on the east side of the inn—including a few that have Juliet balconies—overlook the expansive lawn, pool, and ocean.  The rooms on the other side of the hall have views of the neighborhood which, believe me, is charming in its own right.

Luckily for me, my room had a ocean view. When my room was ready, I trailed Connor, the bellman, up to my room where he explained the workings of the door lock, the AC, the lights, and the windows. After he left, I splashed water on my face, brushed my teeth, and ran back down the steps to meet Krysten for a tour of the rest of the property. I should mention that there is no elevator in the inn, so to get to most rooms, one must climb steps.  There are, however, two handicap-accessible rooms, and the front entrance is handicap accessible.

Krysten took me on a tour of the entire inn, from the rocking porch out back where I’d spent the morning, to a rooftop area that they hope they can someday transform into a deck.  The Emerson has a conference center with meeting and banquet facilities (and a great view of the ocean), and they host a number of weddings in the grand parlor and on the lawn.

Speaking of the lawn, it is huge.  Guests can spend time on Adirondack chairs, play horseshoes or croquet, or go swimming.  Because there is no sand beach on the property, the Emerson has a lovely pool overlooking, you guessed it, the ocean.  Large granite rock formations  line the lawn and beach; Rockport was a major source of granite with quarries all over town.

I knew that Krysten had work to do, so I went upstairs to clean up and relax.  I sat on the bed to look out of the window, and the next thing I knew, my alarm was ringing.  I’d slept a good three hours with the windows open and the sea air and sounds lulling me to sleep.  Refreshed, I headed back downstairs for dinner.

The grand parlor, painted a beautiful seafoam green with white accents, anchors the inn’s signature staircase and offers parlor tables (aka my desk), sofas, and chairs.  Artwork by local artists grace the walls, and the windows offer that view that only nature can provide.  During the day, soft music plays in the background, and late in the afternoon, the staff changes it to a more uptempo genre to welcome guests to the bar and restaurant.  I spent a good amount of time writing and editing from my “desk” in the parlor, and on the night that the bar was closed and I was the only person in the room, Lisa (of guest services) asked me if the music was okay or should she change it to something softer. “My mind is so much on this magazine,” I told her, “that I wasn’t even aware the music was on.”

The bar , which has been in the inn for some years, opens at 3 pm on the days the restaurant is open.   In addition to wines, beers, cocktails, and soft drinks, the bartender, Franz, will also serve guests a snack or light supper from the restaurant’s menu. One of the nights I was there, a couple staying at the inn ordered the  Sasquatch Smokehouse Sampler, a mix of smoked salmon, cod, trout, mussels, paté, mustards, and crostini. (I’ll discuss the food and restaurant in Part II.)  They enjoyed their fish white wine.

Each evening, Franz and Krista, one of the waitstaff, were sure to ask me and any other guest if they could get us anything from a cocktail to water.  They were attentive but not intrusive.

And that was one of the biggest things I liked about the Emerson Inn.  The entire staff was congenial, helpful, attentive, and not intrusive.  I spoke at length with Shavon and Lisa, both of whom work in guest services at the desk. Shavon was nice enough to share some tips on how to get to and get around Gloucester (more on that in Part III). She saw me working in the parlor later that evening and came in to check on me and my trip to her hometown.  Lisa and I talked travel and books and Las Vegas, and she asked if I had read a certain book about Las Vegas.  I hadn’t, and the next night, she brought me a copy.  “Share it with a friend when you finish it,” she told me.    Housekeeping even left me a welcome note on the bed when I checked in (right).  Carol, as I mentioned before, checked on me a number of times to see how I was doing when I first arrived.

You may say that the staff knew I was there to review the inn, but not everyone realized it.  I took a few hours each day to sit in the parlor and restaurant and just watch and listen to what went on around me.  Every guest received the same treatment. Everyone, from Krysten down, went out of his or her way to make sure each guest was comfortable.  Moreover, each employee was willing to help out other employees even if they worked in two different areas.  I saw Krysten helping in the restaurant two nights, and some of the bell staff helped set up for a party.  I told Krysten that her staff impressed me immensely. 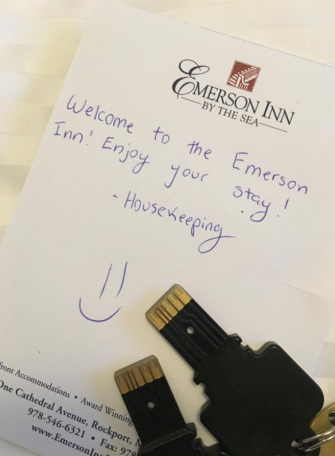 “You know,” she replied,  “I tell my managers to hire the people they can work with and that they LIKE working with.  They have to spend a lot of time together, so that’s an important thing. It makes us a cohesive unit.”

The staff, the light, the fresh sea air, the comfortable accommodations all combine to make the Emerson Inn a delightful place to stay, in my opinion. While I did explore the area (Part III), but I was always anxious to get back to the peace of the inn.

The Emerson Inn, as I mentioned, has six room categories, and prices vary according to the room type, season, date, etc.  You can check availability and rates by clicking here.  Guests do enjoy breakfast with their room, and there is a business center with computer and printer should one need them.  In addition, the inn provides coffee, tea, cold water, and cookies (afternoons) in the parlor each day, and they have a few table games and card for guests who want to play them.

When I was recounting my stay to Mike after I returned home, he asked me two questions.

“Did the place inspire you to write?” he asked first.  I can’t say that it INSPIRED me to write anything in particular.  A few employees told me that there are guests who invoke the spirit of Ralph Waldo to help them write.  Not I. I just found that the entire environment that the late poet loved so much also touched me and gave me the perfect atmosphere in which to write. The hustle-and-bustle world melted away and freed my mind so I could put words on paper.

“Would you go back?” That was the more important question. 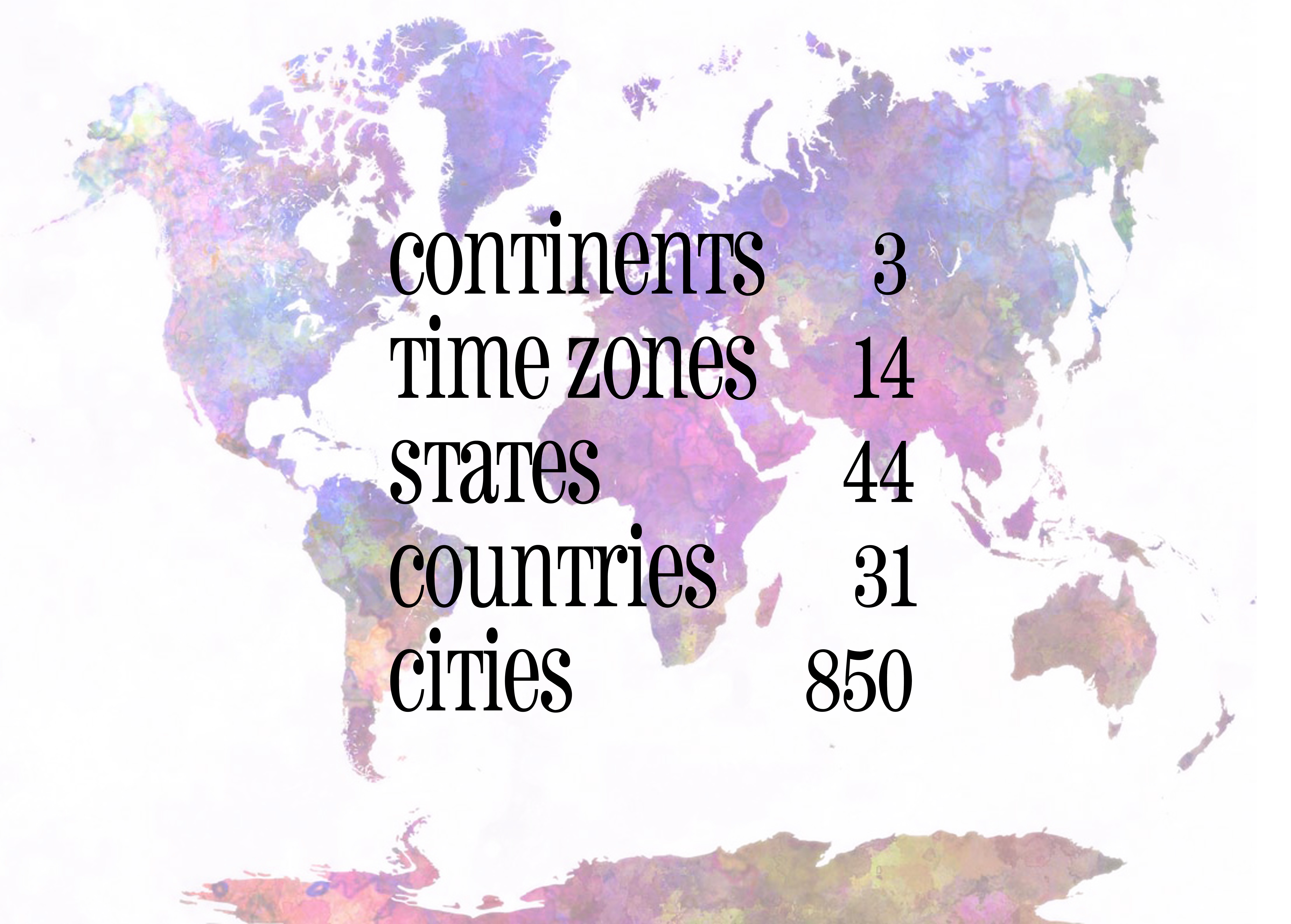