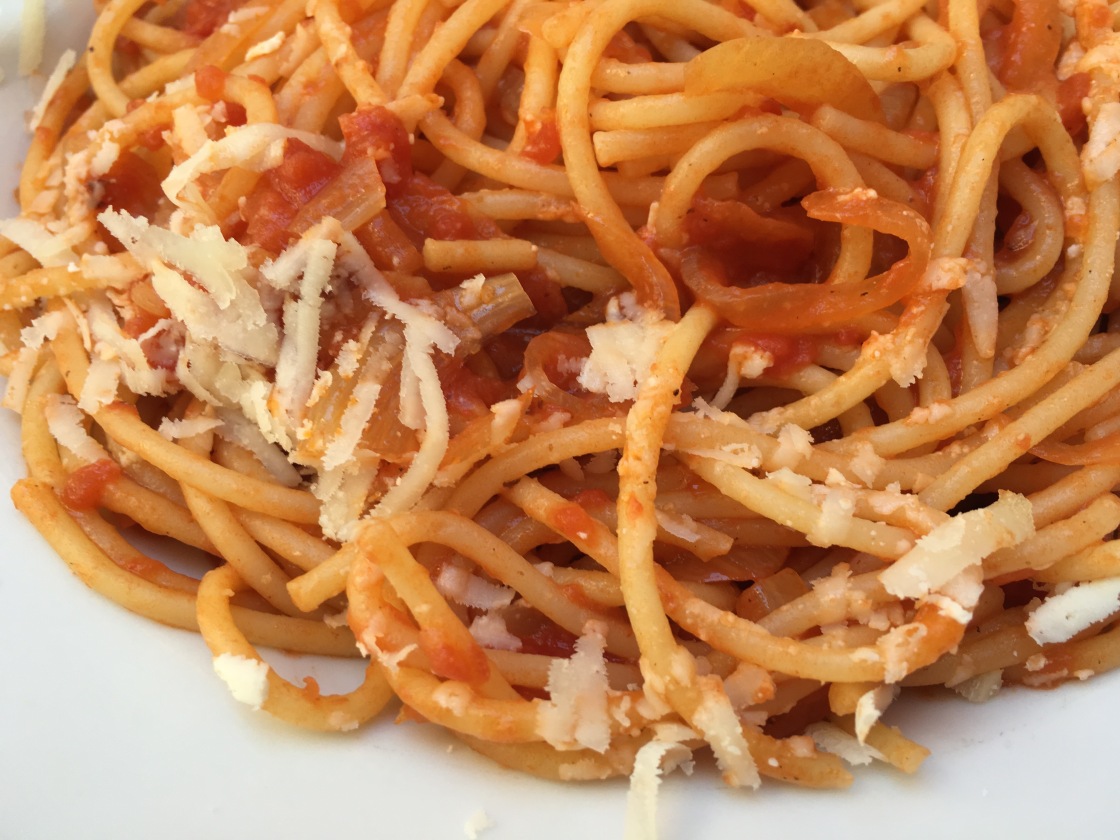 To eat good food is to be close to God.
~ Stanley Tucci

Are you watching Stanley Tucci’s Searching for Italy? Is he making you yearn to go to Italy? Is he introducing you to some new foods or dishes? Do you want to try some (except maybe offal)? You, too, can make some of the dishes at home! Be brave.

It’s probably also one of the easiest to make. Let’s try.

As they do with every recipe, cooks will fight over what they can and cannot add to beef up the recipe. That said, sometimes it’s best to leave some things as they are, and this ancient dish is one that is delicious as it is. Pasta Amatriciana has four ingredients: Pasta, guanciale, Pecorino Romano cheese, and tomatoes.

Pasta—1 pound
The pasta you use is important. Why, you ask? You want a pasta that is thick enough to hold the sauce.While the people of Amatrice traditionally use bucatini, in Rome you will find restaurants offering it with rigatoni or spaghetti.

Guanciale—about 7-8 ounces
Guanciale is pork jowl (guancia = cheek) that is rubbed with salt, pepper, and fennel or thyme and cured for about three weeks. Its flavor is stronger than that of pancetta (pork belly), and I find it quite salty. Guanciale is harder to find in the US, so pancetta is a good substitute, and in a pinch, bacon will work. That said, they will affect the flavor of the dish. Whatever you do, though, don’t use smoked bacon or pancetta.

Pecorino Romano—2/3 cup (or more)
Pecorino Romano cheese is the cheese of central Italy. My grandmother and mother used it exclusively, and it’s still my favorite. (True Story: I never had parmigiana until I was in college.) Made exclusively from sheep’s milk, pecorino is salty, aromatic, and sharp, all of which enhance the taste of sauces. In a pinch, you can use asiago or parmigiana, but they will affect the taste.

Tomatoes—28 ounce can
You may be surprised that I say to use canned, crushed, or diced tomatoes to make this sauce, but if you use fresh, which I have done, it will taste different. That is not to say that the taste will be bad, it will just be different.

Cut the guanciale into small cubes or strips and add to a pan. You should not grease the pan because the guanciale is fat enough. Cook it over a medium heat until it crisps and turns dark brown. Note that because of its high fat content, it will brown rather quickly, so keep an eye on it so it doesn’t burn.

Put on a pot of water to boil while the guanciale is cooking.

Add the pasta to the boiling water, cook until al dente, and drain.

Add some of the pecorino romano to the tomatoes and stir. Add the pasta to the pan and mix everything together.

Plate the pasta and add the guanciale and more cheese on top.

#1…I decided to make the amatriciana before I checked to see what pasta I had. Since linguine was all I had, I ended up using it. I much prefer amatriciana with regular spaghetti.

#2…The guanciale I bought to make this was way too salty and strong in flavor. The times I have had it in Italy, I’ve enjoyed it more.

#3…The spaghetti amatriciana that I had at Eataly (photo at top) had onion in it. Purists would say it is not amatriciana. Chris would say that it sucked.