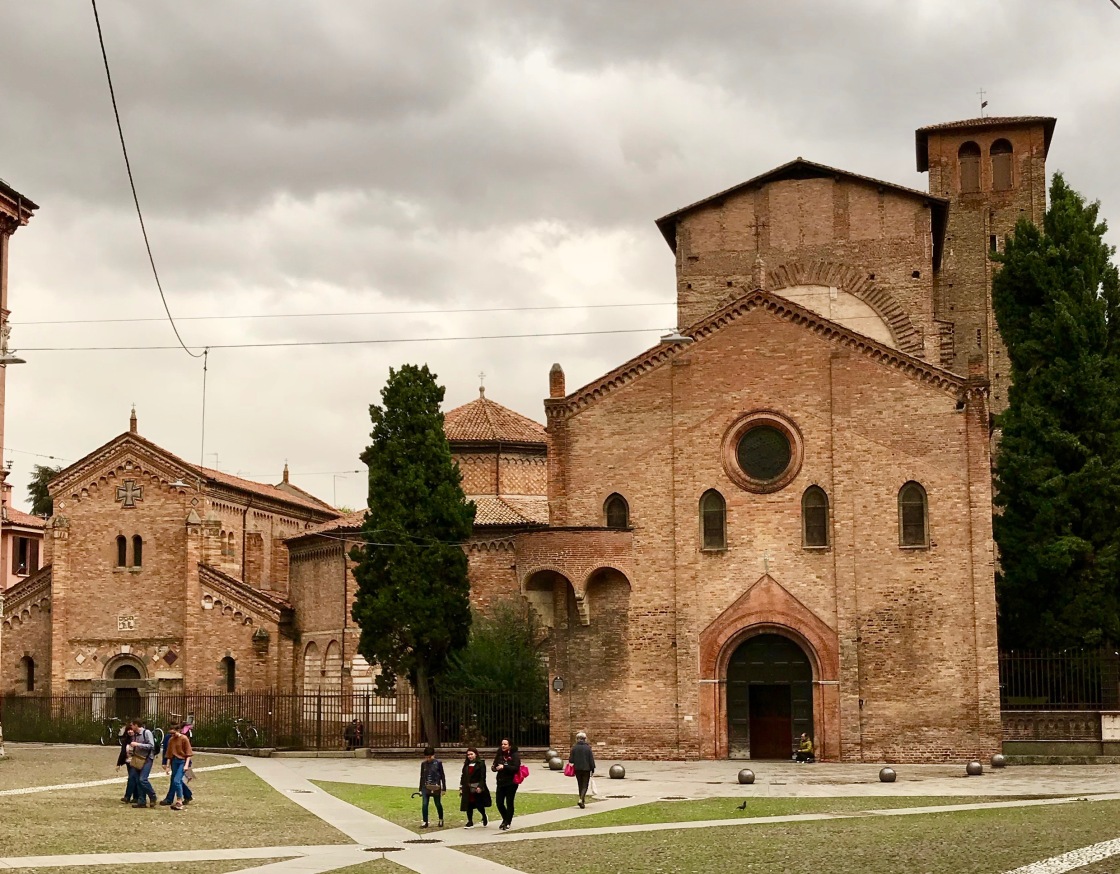 Seven Churches in One

“I like the silent church before the service
begins better than any preaching.”
― Ralph Waldo Emerson

I read recently that a lot—not all—of Italians think that the Roman Catholic Church is as Italian as pasta. I’m not sure that I quite agree with that statement even though more than 80 percent of the population is Catholic. Until 1870, the Church controlled a lot of the Italian peninsula. The unification of the country put a stop to that, but the Church’s influence is still there.

I don’t want to get into that, but churches do intrigue me. Up the street from where I live when I’m in Bologna is the beautiful Piazza Santo Stefano.  Anchoring the triangular-shaped piazza is the complex of Sette Chiese di Santo Stefano, the Seven Churches of Santo Stefano. Legend has it that St. Petronius, patron saint of Bologna and former bishop, wanted to create a church that represented the passion of Christ and the holy sepulchre in Jerusalem. He ordered the church built on what was once a Roman temple of Isis. If you look at the cover image above, you can see three of the remaining four churches—the main church, the Church of the Crucifix (right) and the Church of the Holy Sepulchre (the round one on the left).

When you enter the main church, you note that the altar is at the top of a flight of stairs.  The crucifix for which the church is named hangs above the altar. Below the altar is a crypt that is there solely for prayer and meditation.  On an altar in that crypt are the remains San Martino.

There is a door on the left side of the front of the church that leads to the Church of the Holy Sepulchre.  This cylindrical building is the oldest of the churches and is said to be an exact replica of the Holy Sepulchre in Jerusalem.  (Interestingly, by the way, a lot of locals call this complex Holy Jerusalem, and one of the streets leading from it is Via Gerusalem.)

If you look at the photo, you can see that the altar in this church also sits at the top of the stairs.  The grate below the altar is where San Petronius’s remains rested until the diocese moved them to the basilica that bears his name in Piazza Maggiore.

There are 12 columns surrounding the mausoleum, and I read recently that before the saint’s remains moved to Basilica San Petronio,  the church would annually open the mausoleum for one week so that the faithful could crawl inside and pray or pay their respects. Apparently, it was tradition for pregnant women to circle the mausoleum 33 times (once for each year that Christ lived) and then crawl inside to pray. (No offense here, but I’ll light a candle.)

From Church of the Holy Sepulchre, you can exit a number of different ways.  To the right of this altar is another doorway that leads to the Church of Saints Vitale and Agricola. The two Romans were master and servant, and they were the first two Bolognese citizens to die as martyrs for their faith under Emperor Diocletian.

The saints’ sarcophagi remain in the dark, barebones church.  There are no permanent pews, and the plain altar sits in a cove against the back wall.  The diocese still holds Mass in this church, also, and the priests set out plain folding chairs for the faithful.

(A side note: I actually like this church the best of the three I’ve mentioned even though it is stark. The windows in the brick walls—stained orange and yellow glass—add a bit warmth and glow to this otherwise dark and cold.

Going back through the Church of the Holy Sepulchre, you can exit to Pilate’s Courtyard.  In the middle is a stone basin that dates to the 8th century, and under one of the porticoes is a rooster that represents the cock that crowed after Peter denied knowing Christ.  (“…this night, before the cock crows, you shalt deny me three times…”).  In addition to a number of little altars and chapels under the porticoes  in the courtyard, there are also several tombs.

The thing that I like best about the courtyard is the brickwork. Said to also date to the 8th century, it is the work of the Lombards, the Germanic people who settled in northern Italy.  The brickwork is all original, according to the young friar with whom I spoke recently.  If you look at the photo on the left, you can see both the basin and the brickwork.  Note that the church with the brickwork is the round Church of the Holy Sepulchre.

The last of the churches still remaining is at the far end of the courtyard. ( called the Holy Cross or the Martyrium),  It’s rather odd as it is more horizontal than vertical.  In other words, you enter and find chapels in front of you while the altar is to your left (if that makes sense).  Again, there are no pews or chairs, and I have no idea if they say Mass here or not.

There are a number of chapels, as I mentioned, along the courtyard. Most of them are smaller, but one is a larger place of worship that contains the photos of airmen and navy airmen killed in battle during world wars. Some of the others contain fascinating pieces of sculpture that depict the agony and crucifixion of Christ.

Finally, to the right of Pilate’s Courtyard is another courtyard that was once part of a cloister.  The lower section dates back about 1000 years while the second story is much newer.  There is a well in the middle, although today its bucket holds flowers.  The priests (I believe they are Franciscans from their dress.) run a small museum and gift shop in one section of the old cloister.  On display in the museum are works of art, religious artifacts, religious clothing, and relics of various saints.  They grow flowers and plants and make essential oils that they sell, too.