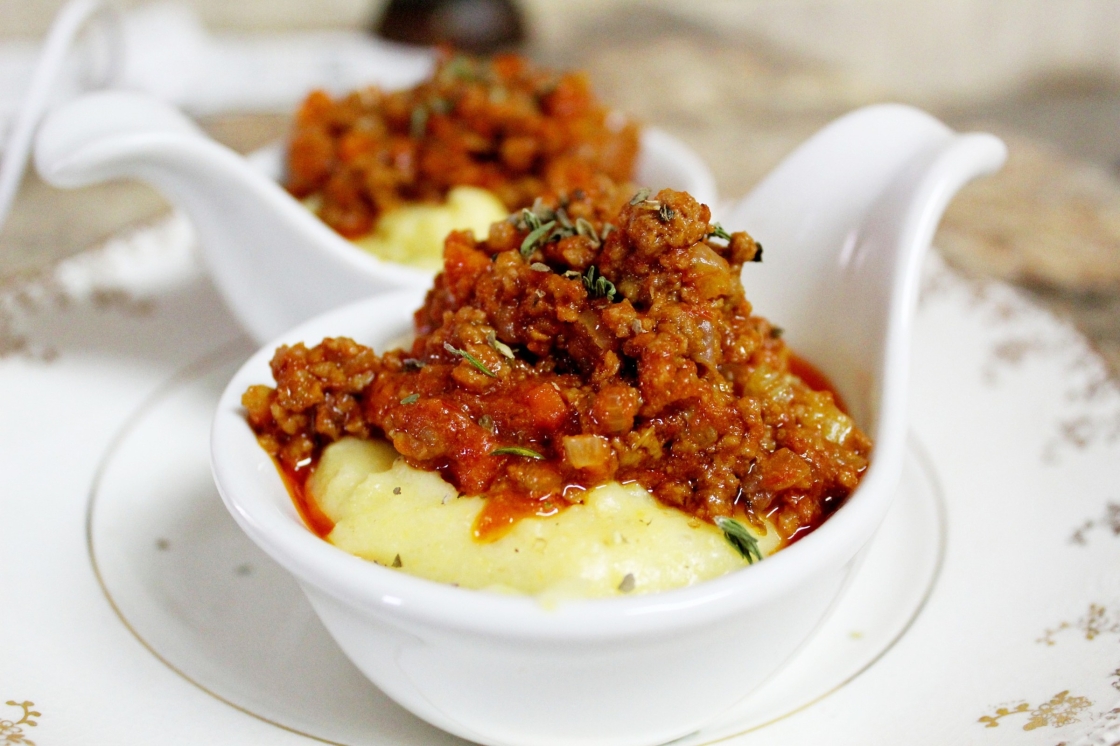 “Polenta? You mean Italian grits?”
~Unknown (for a good reason)

In my mind, I have a picture of the first time I remember eating polenta. It wasn’t the first time, of course, as I probably ate it as a baby and don’t remember. This particular time, though, I was probably four or five, and my mother fried triangular pieces and served them with sausage and maple syrup. I much preferred when she made the more savory version with sauce, pecorino romano cheese, and sausage.

Over the years, I’ve made polenta myself as it isn’t hard. You simply bring water (or broth) to a boil, add the polenta, and stir until it starts to thicken. Mike, however, is not a fan, so I’ve limited cooking it to when Italian friends come over or when I’m really craving it.

When I was in Italy two years ago for my citizenship residency, I realized that we would be there for Sagra della Polenta in my grandparents’ hometown. “We’ll be in the area for the polenta fest,” I exclaimed. Mike was not impressed. “We will have to go,” I continued.  “I have to experience it.”

“Why would anyone have festival celebrating polenta?” he asked me.  Why, indeed.

Secondly, polenta rognosa is the typical dish the carbonari (charcoal makers) of the town would take into the hills with them almost everyday.  It is a heavy, filling dish made of white corn polenta, crushed sausage, peccorino cheese, and sauce, and it helped provide nutrition while they worked long hours in the cold in the hills near the town.

Making enough polenta rognosa for the festival takes a lot of work, and the men and women of Pettorano work together to prepare.  You can watch my friend, Donato Ferrara’s video of how they make and prepare the polenta by clicking here, but let me just say that the men stir the cornmeal in HUGE copper pots until it is ready, and they then pour it onto a table to set up.  Using a string, someone slices the polenta, and the slices put into an aluminum foil pan.  Women layer the polenta with sausage and cheese, and before serving it, they add sauce.

“Isn’t that like grits?” someone asked me when I was exclaiming over the fact that we were hitting the sagra.

The truth is that the two are similar; similar, I said, not the same.  Polenta was originally made from a variety of grains (barley and buckwheat come to mind), although today it consists of white or yellow cornmeal.  The difference between it and grits comes from the type of corn used to make each, not the color of corn.  Grits, as you may know, are soft and usually served as a porridge. The corn used to make them is called a “dent” corn— one that has a high soft starch content.  Grits made from ground dent corn do not hold their shape very well.

Polenta, on the other hand, comes from flint corn, a very hard corn that is mostly grain. Polenta is coarser and holds its shape better.  That said, depending on how one grinds the cornmeal, the polenta can resemble a porridge or, like the ones made for the sagra, a slab.  The other major difference between polenta and grits is that polenta takes some time to cook (unless you buy the instant  or polenta in a tube in the store), and you must stir it constantly to keep it from lumping up.  After 45 minutes or so, you might be too worn out to eat it.

I will admit that Mike and I did not try the polenta at the festival.  He is not a fan, and while I wanted to have some, I didn’t feel well and didn’t have an appetite.  We enjoyed watching everyone else eat it and some of the other food items that were on sale.  The thing I liked best was seeing the town so alive with people because all-too-often, I go there and don’t see more than five or six people.

There was music from a local group, and a number of people (mostly women), got up and danced.

I was quite lucky to see a few old friends and meet a few new ones including the dancing woman in the purple sweater whom, I believe, is a cousin of some removal. My great-grandmother was Antonietta Trombetta, and a few years ago, when I was just *starting* this journey, a woman I don’t know told me I looked like a Trombetta from the eyes up.   People tell me I have the Crugnale cheeks and nose and mouth, the Berarducci this and that (including the testa dura—hard head).  That’s all good since that’s the family tree as far as I know it.

Thanks to my friend, Donato Ferrara, for allowing me to use some of his photos of the preparation of polenta, and to Mike for taking the others.