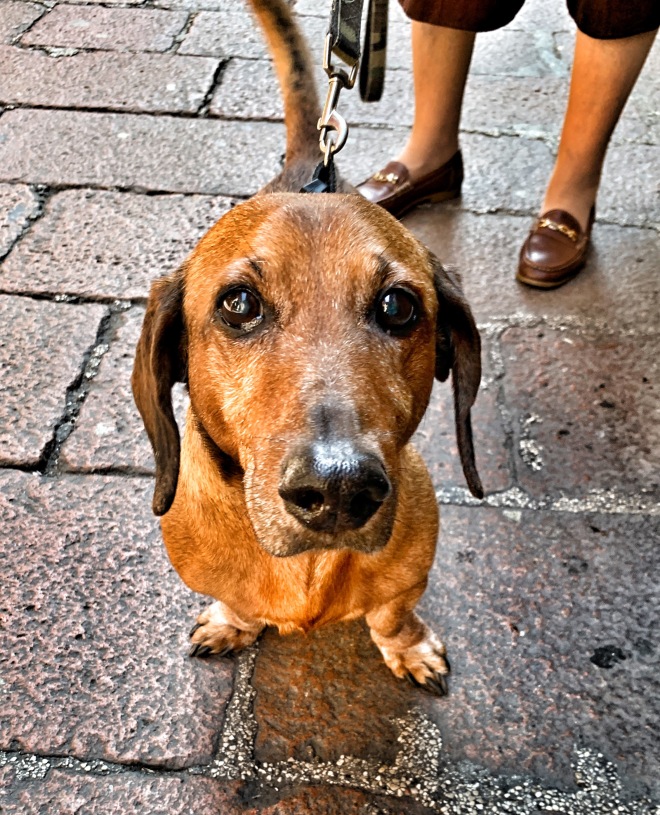 Dogs are the leaders of the planet. If you see two life forms, one of them’s making a poop, and the other one’s carrying it for him, who would you assume is in charge?
~Jerry Seinfeld

Five years ago, when I was in Bologna to learn to speak Italian, I was at Piazza Nettuno taking photos when I heard a woman imploring “Vito” to get a move on. “Basta, Vito,” she kept saying. “Basta!” When I looked over, I saw a tiny woman trying to propel her chunky dachshund out of the piazza. I approached her to ask if I could take the dog’s photo, and Audra and I ended up talking—15-20 minutes at the most. When she left, she had to carry Vito to get him to leave.

Every time I go to Piazze Maggiore and Nettuno, I look around to see if I see Audra and Vito, and only twice has either crossed my path. Once I saw them from afar, she still pulling said dog one way, and he pulling her the other. The other time, she was alone, rushing down a street between raindrops. We exchanged waves that time.

Fast-forward to my last day in Bologna last month: After almost a month of rainy days, Bologna was finally sunny on May 31. I decided to walk around the historic center to go by my favorite places. I was about a block away from Piazza Maggiore when I saw a woman and a chunky dachshund coming toward me.

“Vito,” I exclaimed, getting the dog’s attention and startling the woman. “Audra. How are you?”

“Do you remember me?” I asked her not expecting much, but she surprised me.

“Of course, I remember you,” she said. “You are a journalist. You have a dog. We talked about him and Vito.“

“Yes, I remember. Vito is known all over the world.” We laughed and talked a few more minutes before she and Vito headed one way and I, the other.