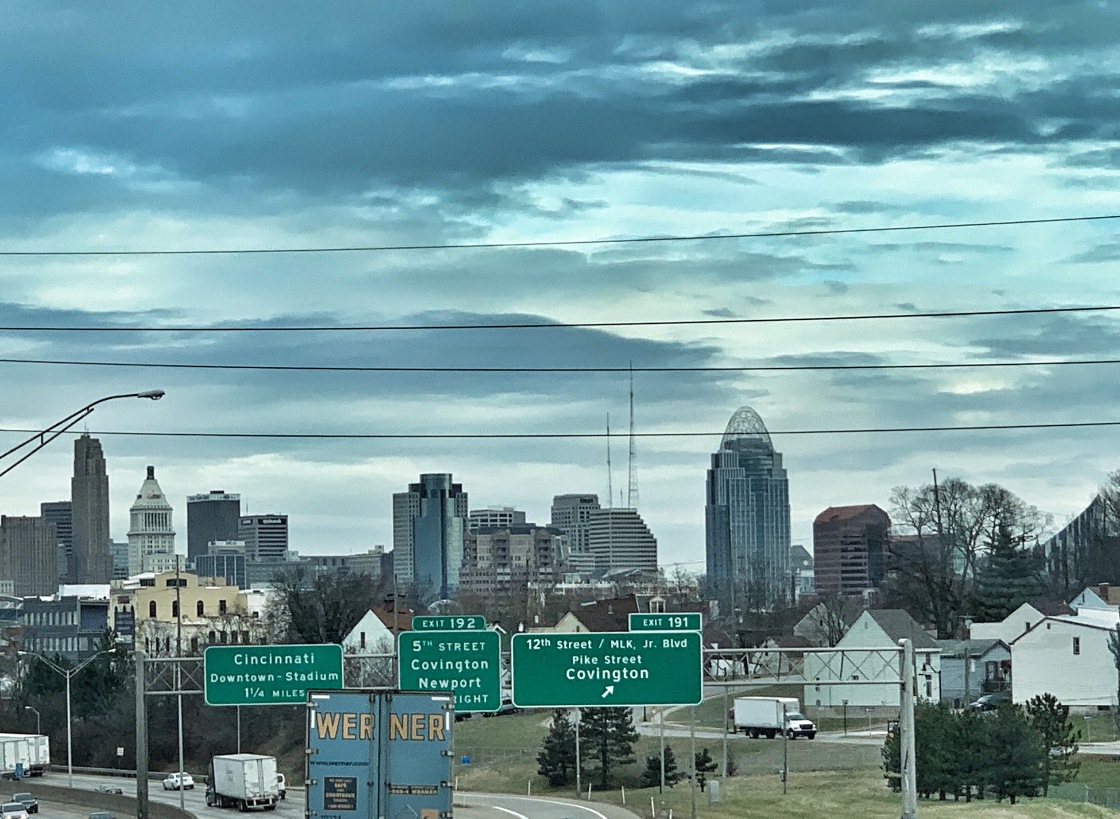 Rainy days should be spent at home with a cup of tea and a good book.
~ Bill Watterson

Mike, the Little Dude, and I left Nashville early Friday morning so we could get to Cincinnati in time to have lunch with friends before they had to go to an afternoon meeting.  We love Cincinnati, and if I had to choose one place to live in the state of Ohio, I think I would have a hard time choosing between Cincinnati (where Mike and Jason attended Xavier University) and Columbus (where I moved after college and lived for 10 years or so). We both love driving north on I-75 through Florence and Covington, Kentucky, rounding a big bend, and having the Cincy skyline come into view (photo above).

Please allow me to share a few photos from Nashville area and the drives through Kentucky and Ohio.

We’re amazed at the growth in Nashville since we left. The skyline has changed so much, and the traffic is horrible.

We drove to the east side of town and passed Nissan Stadium, home of the Titans. Mike is still a fan, although I always preferred the Bengals.

We drove by our old house. Ten months after we sold it, Nashville experienced a torrential rain, and our entire street flooded. Luckily, our house was at the top of the incline on the street, so the water came within an inch of getting into the house. It did destroy the furnace and AC as those units are on the side of the house, but since some neighbors had three-feet of water in their homes, that was nothing.

I did love that house, by the way. You can’t see it, but behind us was a cow pasture. The subdivision sits on what was once part of a cattle farm, and the land behind our side of the street was still part of said farm. The late owner deeded the land to a public trust, so it will never have houses on it. I can’t tell you how many calves I saw drop (birth) during the 14 years we lived there.

We stayed at a hotel in Brentwood and passed Ronnie Dunn’s (of Brooks and Dunn) house every day. I like the Nashville stars as most are quite approachable and don’t try to hide behind huge walls.  I will say, though, that most Nashvillians leave them alone.

If you weren’t aware, the first settlers put down roots in Cincinnati in 1788.  The third largest city in Ohio, it is the 65 largest in the US.

Mike and I met Tom and Maureen at Price Hill Chili, a local restaurant on Price Hill on the west side of town.  I love the old buildings we passed, and I wish someone would fix them up.

After lunch, we had to stop at Xavier, of course.  Mike lived in Husman Hall when he was at Xavier, and something tells me he would like to go back. The campus has changed so much even since Jason graduated in 2001.

I’m not quite sure what was going on at King’s Island when we passed it Friday, but there were a lot of cars in the lot.

Corn and soybeans are major crops in the southern part of Ohio, and silos are on almost every farm in the area.

Of course livestock is important to the state, too.

Meander was, for a long time, almost bone dry.

Tomorrow: Good times on the adventure