Her gaze dims as her nostalgia for Palermo overcomes her. Those smells of seaweed dried by the sun, of capers, of ripe figs, she will never find them anywhere else; those burnt and scented shores, those waves slowly breaking, jasmine petals flaking in the sun.
~ Dacia Maraini

I’ve never been to Sicily. Mike and I were thinking of going last December before I did my citizenship residency, but airlines do not service that part of the country all year, and connections were difficult. I gave up, and we ended up spending straddling the end of 2017 and the beginning of 2018 in Bari, Puglia. While Bari wasn’t quite what we expected, it was okay for a few days, and I spent most of my residency in Abruzzo and Bologna.

It’s always difficult for me to leave Bologna, and I mentioned it to Giovanni, my friend who owns the apartment, the other day when he was telling me about Sicily. “I just love Bologna,” I told him.

“Of course,” he replied, “you have a lot of friends here.”   That’s very true, but moreover, there is something about the city’s atmosphere that yanks at my heart. “You will love Sicilia,” he assured me. “It is such a beautiful place like no other.” 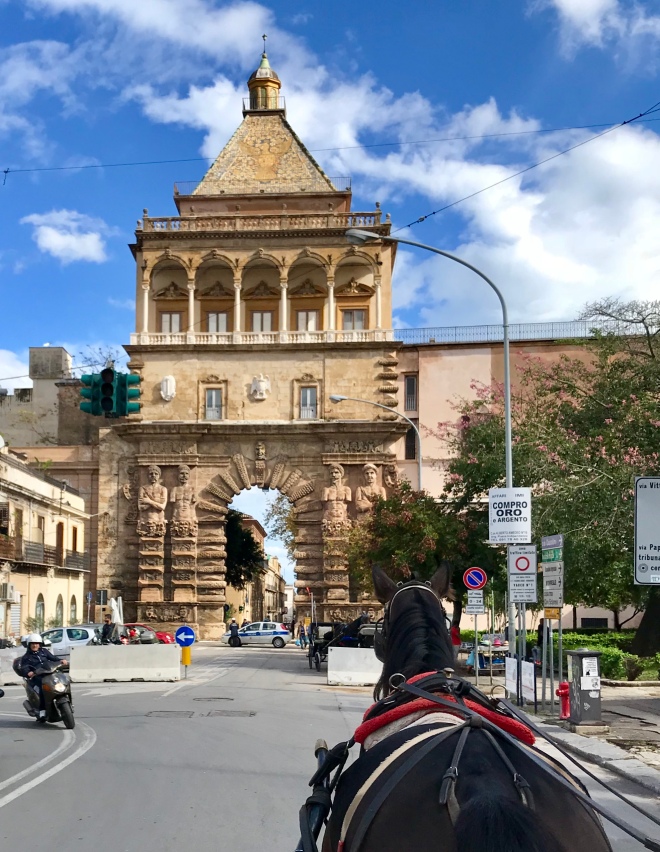 Somehow the travel coordinator (moi) scheduled our plane to Palermo for 6:05 this morning. (Actually, there was little I could do as it was the only flight available.) We were, therefore, up by 3:45 and in a taxi to the airport 30 minutes later.  Any personal fog I had lifted upon our landing as Palermo at 8 am was sunny and quite a bit warmer than Bologna had been.

Spartaco, the owner of the apartment we’re renting in Palermo, picked us up and the airport and started telling us—well, me since Mike speaks no Italian—about the storm they had experienced in the area yesterday. Apparently, Palermo had torrential rains, and the water got so high that the main roads into the city flooded. Several people died because they drove into the high waters and, trapped in their cars, they drowned. Ugh.

“That is how Sicilia is, though,” Spartaco explained to me. “We have one day of rain, then and weeks of sunshine. It will be beautiful all week.” Spartaco continued to talk as he drove us to our apartment, pointing out this and that historic site, restaurant, gelateria, and more. His monologue went on when we got to the apartment, although at this point he was marking up a map with locations of places we had to go.

“Are you going to remember all of this?” Mike asked me.  I assured him I would, and when our kind owner finally left, I collapsed on the bed. “If he had been talking to me,” my husband told me, “he would have lost me three minutes after we left the airport.” I rolled my eyes and thought that he didn’t have to tell me that. He isn’t the most patient listener.

We decided to walk around the area a little bit as our apartment is in the middle of Palermo. Instead, we ended up taking a carriage ride around the historic center because Giuseppe, the driver, would not give up on us. It ended up being okay because we were tired, and walking around would have been a little difficult.

We’ve spent most of the rest of the day in the apartment. While it is beautiful, it is in the middle of a residential street…a narrow, crowded, loud, chaotic residential street. We tried to take a nap, but only one of us was successful.

“I can’t believe you slept through all of that noise,” Mike said to me when I woke up. “Those people were standing right outside of our door.” I said nothing. ” And, I think we must live down the street from a motorcycle repair shop.”

I’m not sure he’s correct about that, but I can tell you that I think everyone who lives in Palermo rode one down our street today.

There was an error retrieving images from Instagram. An attempt will be remade in a few minutes.