A Big First (or Two)

In every dish, the vegetables win over everything else.
~ Chef Luca Giovanni Pappalardo

A couple of years ago, my friends Laurell Boyers-Bastiani and Federico Bastiani told me about a chef friend of theirs whose name I remembered only as Luca. They showed me his cookbook (Cucina facile di pesce—Easy Fish Cooking), and given the fact that I don’t cook fish, I looked through it but didn’t write any recipes down. Earlier this year, Fede mentioned that Luca had recently moved to Pane e Panelle, a restaurant not too far from my apartment. 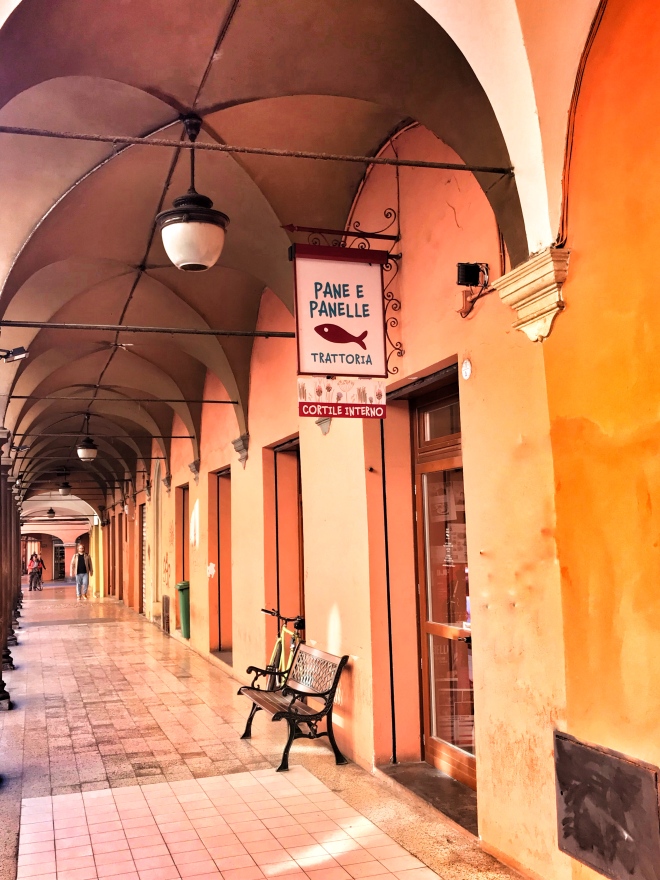 To make a very long story very short, I decided that I should interview Chef Luca Giovanni Pappalardo for Food, Wine, Travel Magazine because his cuisine is a bit different from what one usually finds in Bologna. He agreed, and we had nice “conversations” via email and decided that I should drop by to take photos today. I’ll let it go at that because I’ll go into details about him, his food, and more in the article.  I do, however, want to tell you about two things I tried today for the first time in my life.

Isabel Muratori, the owner, and Chef Luca invited me to enjoy pranzo (lunch) with them and the staff. I don’t want to give it all away, but the three items that you see on the table were (from bottom) ribollita toscana, winter salad of cabbage, and couscous. To drink, we had water and their own craft beer, Isabel.

“Do you drink beer?” Chef asked me.

“A little,” I admitted as I really drink very little beer.

“More wine?” he surmised, and I agreed that I was more a wine-drinker. I wanted to try the beer because it looked so good.

I ended up drinking two full glasses of the beer, which was a big first for me. Even more, I enjoyed it a lot. (My husband will fall over when he reads that.) The beer had a bit of a lime taste to it, and it wasn’t heavy or overly carbonated.  Chef told me that it actually has less carbonation so that it doesn’t sit on your stomach like other beers.

An even bigger first for me, though, was that I ate couscous, something I’ve always avoided when I’ve seen it on a buffet or table. Couscous, which has been around since the 7 century, is a staple throughout North Africa and has become popular internationally in recent years….just not with me.  It seems that whenever I’ve seen it on a plate or in a serving dish, it looks gummy and slimy to me, and I avoid foods like that.

I had to try Chef Luca’s couscous, though, because I’d read that last month, the Cous Cous Fest awarded Chef Luca second place in the Italian couscous cooking championships. In addition, he told me how he cooked it and what was in it, so I knew I would most likely like it. I didn’t like it, though. I LOVED it. It was a perfect blend of ingredients—couscous, cinnamon, raisins, almonds, and a few other things. I’m going to have to try to cook it once I get home.

Of course, I have to end with a photo of Ofelia, named, Luca told me, after the noblewoman in Shakespeare’s Hamlet.  True to her namesake, Ofelia was gentle and sweet, and had she been smaller, I would have picked her up and carried her home with me. (Only joking….maybe…..)

Could there have been a more perfect day for me? I think not.