I Can See Russia, I

Russia is a riddle wrapped in a mystery inside an enigma. ~ Winston Churchill

“I’m a little nervous,” I said to my friend Stephanie as we prepared to leave our ship and step on Russian soil.

“I am, too,” she assured me.  Neither one of us, though, could explain why we felt the way we did.

We left the ship and headed to passport control, something that we didn’t have to do at any other port of call.  Russia, however, was different, and we joined thousands of others who queued up to face the officers set to make sure we had the appropriate visas to visit their country.  Most tourists must obtain a visa prior to traveling to Russia, and cruise passengers normally get a 72-hour visa from the tour operator with whom they are touring the city. The laws are convoluted, but suffice to say that with the 72-hour visa, tourists must be accompanied by a tour guide. If the wander off on their own, they can be arrested and fined or jailed.  (Believe it or not, there are Tourist Police.) It took over 30 minutes, but the four of us finally advanced through the line to face a stoic officer who looked at our passports, at us, at our passports, at our tour tickets, at us, at our passports.  No smiles. He stamped a page of the passport, stamped a small sheet of paper, looked at us again, and shoved the passport back under the glass window.  We finally crossed into St. Petersburg.

Visiting the former USSR was something I never had considered.  When we were children, adults always told us that Russia was our enemy, a mysterious and evil country to fear and avoid. The end of the Cold War changed that, to some extent, but with everything going on in the world these days, I was wary of Russia.  Mike, on the other hand, was interested in visiting St. Petersburg and the Hermitage.  Many of our friends had been and had loved it, so he thought we should, also.  I was game….nervous, but game. 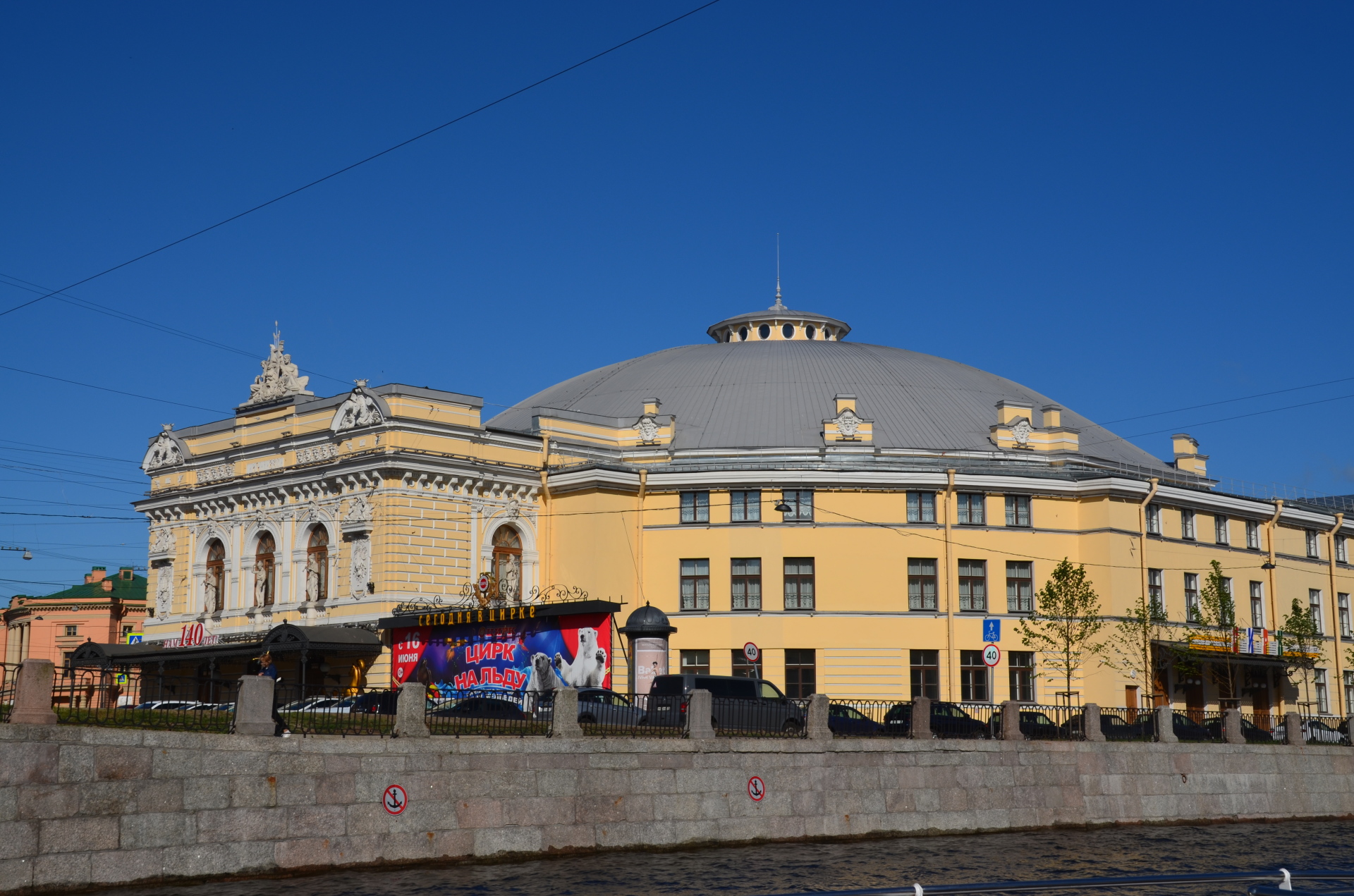 In my rational mind (Yes, I do have one.), I knew that an entire country couldn’t always be covered in clouds, yet the picture I had in mind of Russia’s weather was one where it was misty, rainy, grey, and cold all the time. Nyet.  We arrived in St. Petersburg at the beginning of summer to find a chill in the air, somewhat feisty winds, and cerulean-blue sky that rivaled ours in Las Vegas.  Over the three days we were in St. Petersburg, it rained only once, and that was for about two hours.  The rest of the time, the sky was blue, and much of what we saw sparkled in sunlight.  It was, however, still pretty cold considering we are used to triple-digit temperatures at this time of year. 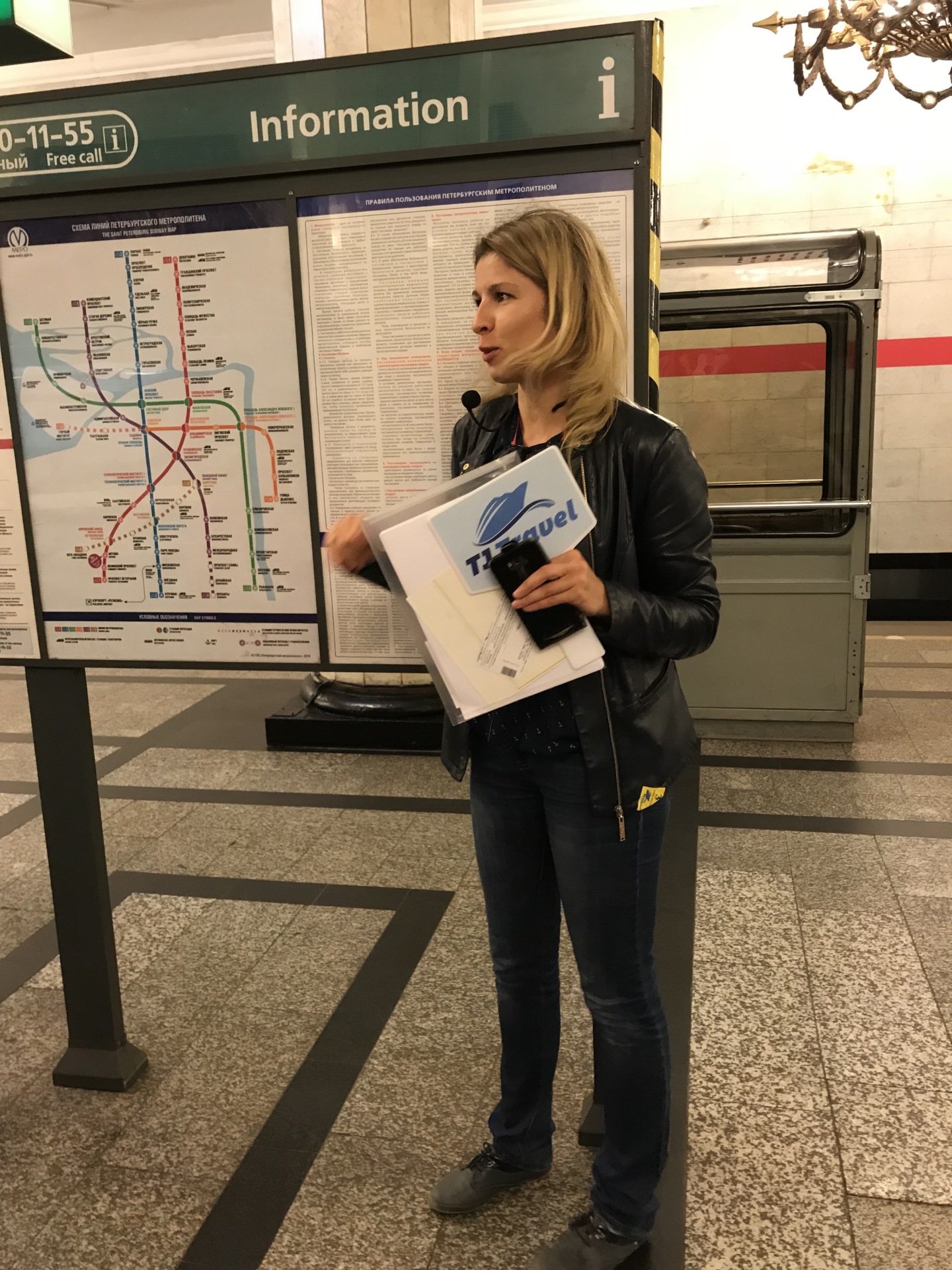 Having grown up with paternal grandparents who emigrated from territory that once belonged to Russia (and, depending on the day, to Austria, Poland, Germany), I expected to see people that looked like them—little old men and women in drab clothes and babushkas (the women) frowning and scurrying around the city with their heads down. I expected that they would neither smile nor engage with us and that they would view us as we viewed them—strange creatures from some country which was not really our friend. 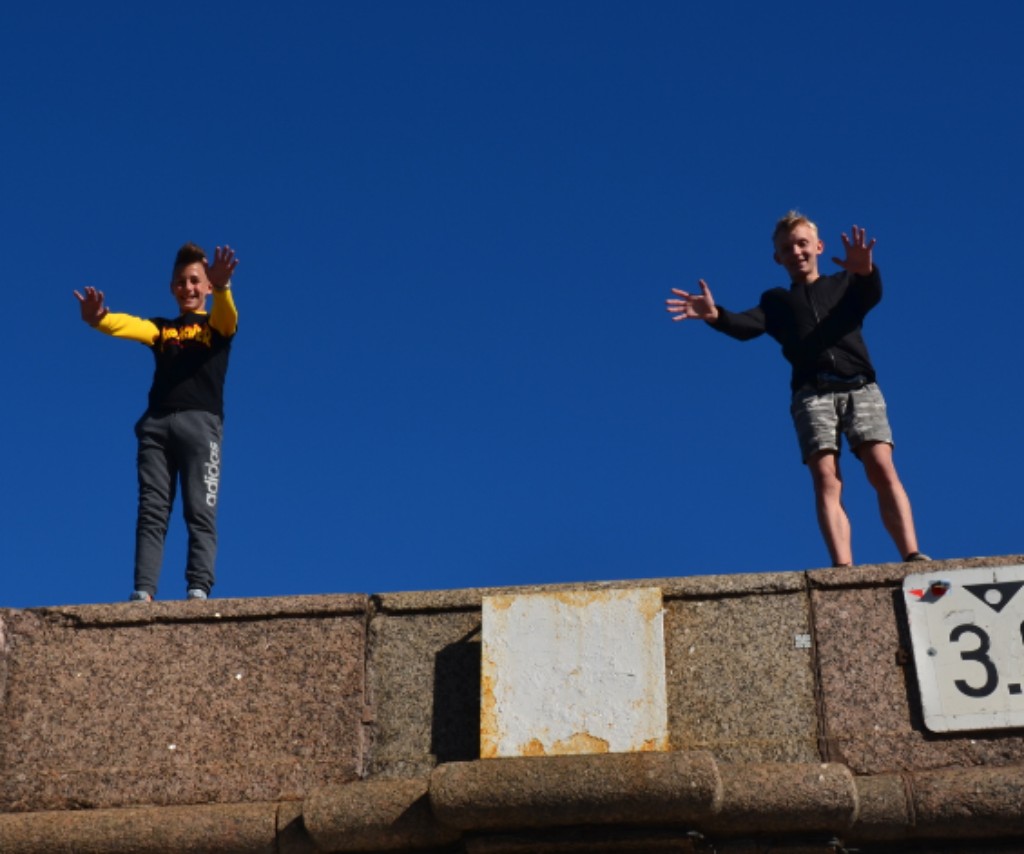 A couple of happy Russian kids

(More on them later)

In this respect, I was partially right and partially wrong.  Our tour guide, Lisa, and driver, Igor (Yes, his name was Igor.), were friendly, talkative (Well, she was. He didn’t speak English.), and stylish in jeans and leather jackets. Others we saw dressed in modern clothes—leather jackets and jeans apparently are the norm, and I didn’t see one old woman in a babushka.  Younger kids wore athletic gear, mostly soccer-related, and some even braved the 60-degree temps with shorts. Students hauled backpacks through the crowds, spoke into their Apple and Samsung phones, and listened to music via earbuds. 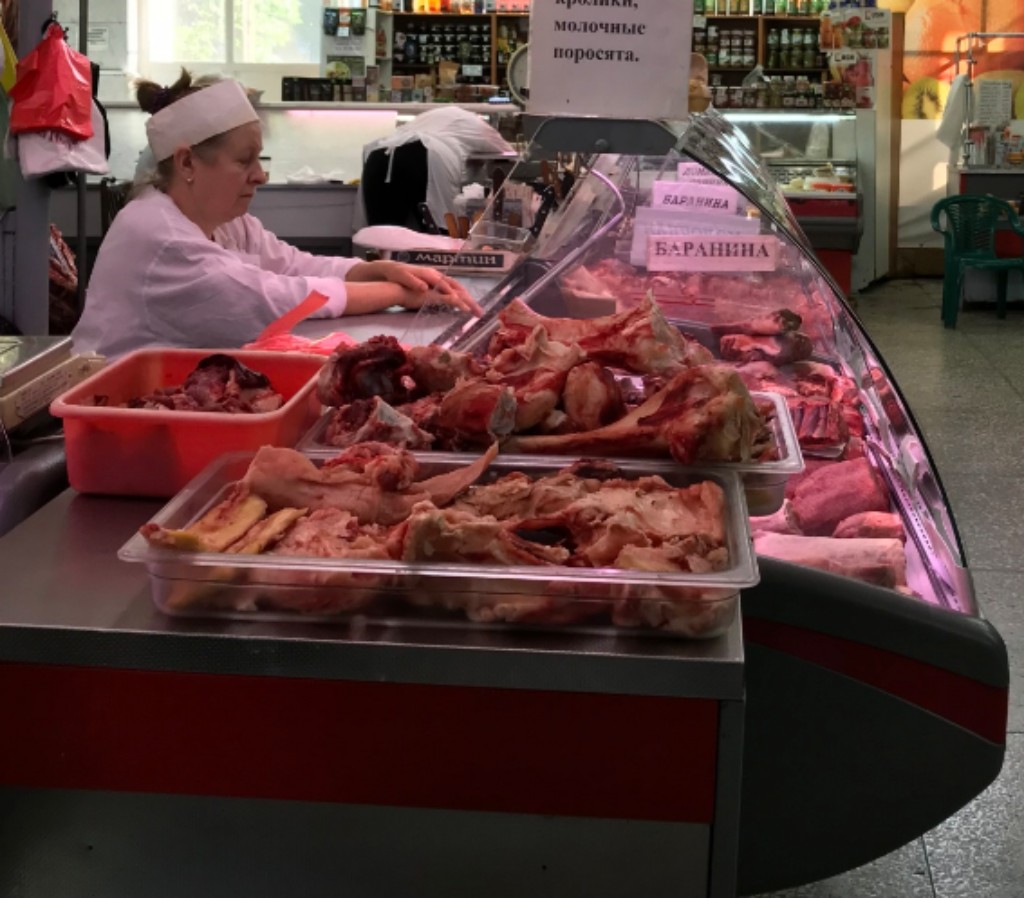 While some of the younger people seemed a bit friendlier, the older ones were more somber and closed. From the first passport officer we encountered to the last one who stamped us out of the country, not one adult smiled even when we engaged them.  Stephanie and I both smiled, nodded our heads, and thanked the women and men who guarded different rooms of the museums, palaces, and markets we toured. Except for one guard at Peterhof, not one person smiled or acknowledged us in any way.  Blank stares and solemn faces met us almost everywhere.

Let me point out that we had very little contact with everyday Russians.  Those whom we engaged worked, as I mentioned, at museums, palaces, and markets or as police of some sort. I cannot begin to assume that everyone is as serious as the ones we encountered, and I think back to our time in Prague a few years ago where we found the adults to be just as doleful and closed as the Russians.  The man from whom we rented our apartment told me that the older Czechs had lived so long under Nazi and Communist rule that they were still having a hard time adjusting to a somewhat carefree existence. I cannot help but think that it’s probably the same in Russia. 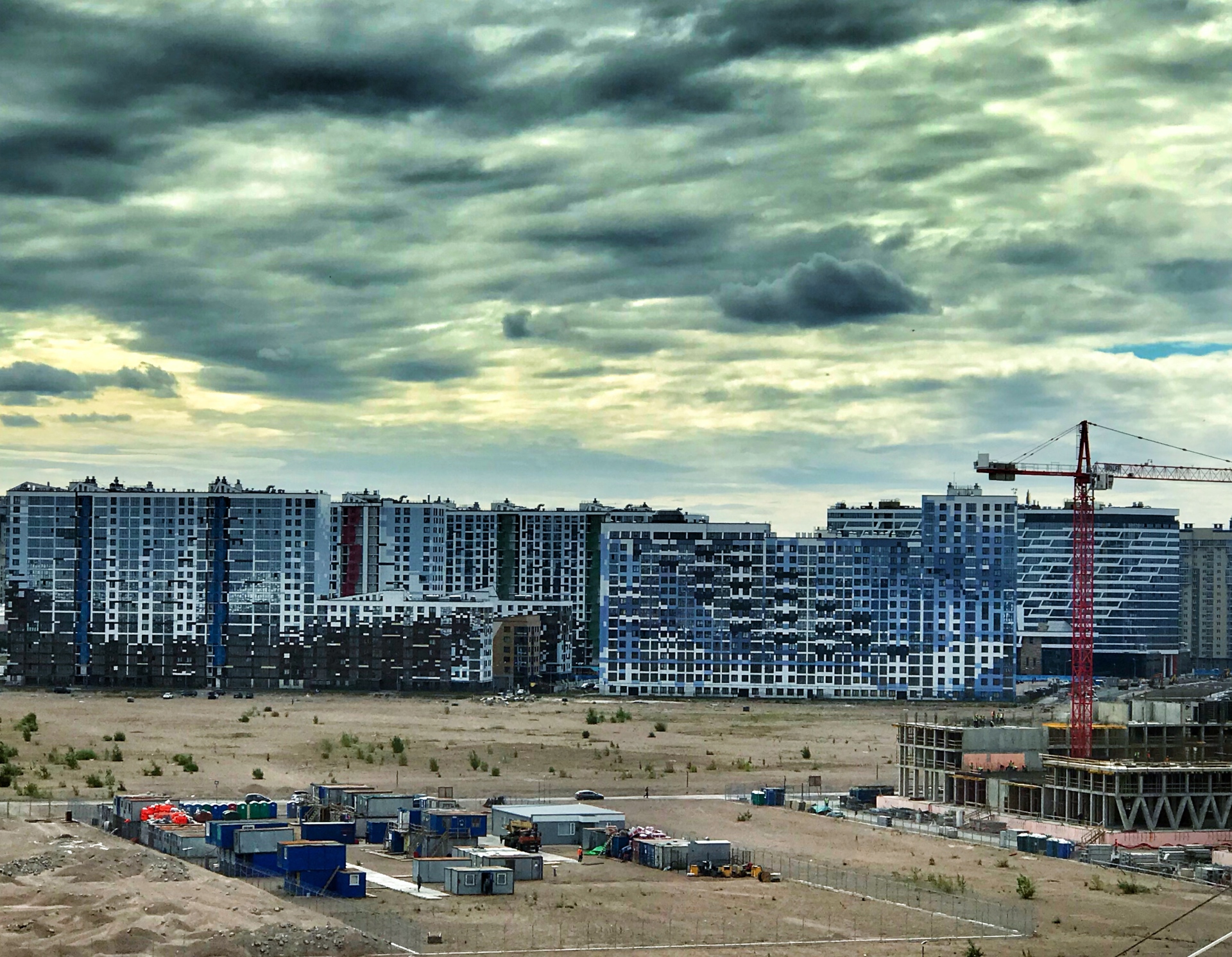 Rows of apartments near the port 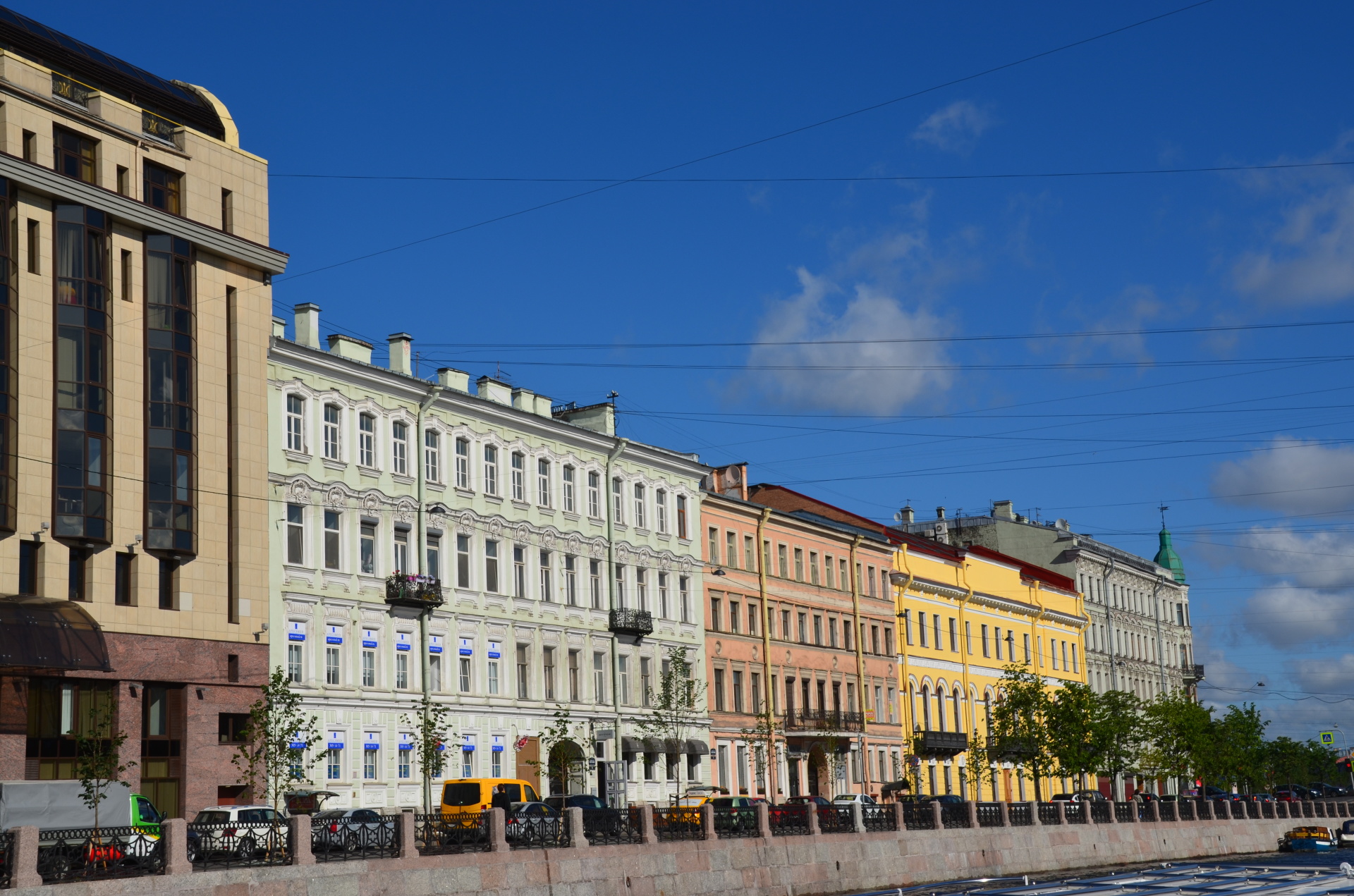 Indeed, rectangular buildings run for blocks throughout the city. The grey, white, or cream buildings, broken only by black, lifeless windows, could have anywhere from 10-to-25 floors.  A very rare few—and those were the new ones near the port—featured balconies.  Our guide told us that many people rent until they can afford to buy.  Rents in St. Petersburg are high, as are prices.  Lisa told us that a one-bedroom apartment there can run upwards of $1300/month for rentals and $150,000 for purchases.  Their one-bedrooms, however, consist of a small kitchen and living area in addition to the bathroom.  She said that most people try to save enough money to pay cash when buying apartments as loans are extremely expensive. 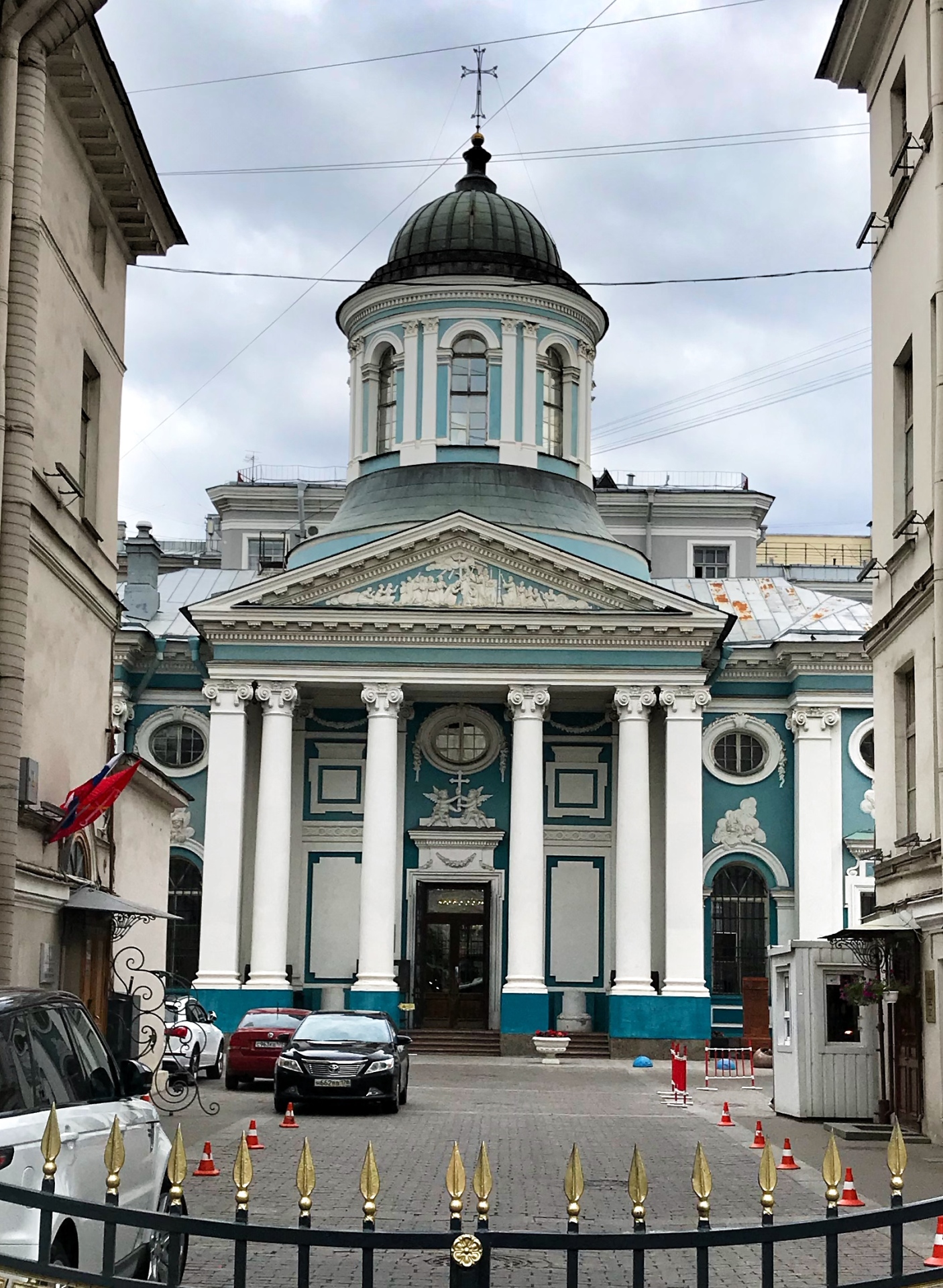 A turquoise church in St. Petersburg

The city blocks were long, continuous rows of buildings, most under six-stories. Instead of the monochromatic edifices, however, yellow, peach, blue, and green buildings lined the streets while white or gold accentuated many in an effort to breathe a little life into the place.  The onion domes which I expected to find everywhere I turned were few and far between, much to my dismay. While many people with whom I talked loved this particular aspect, I found those buildings and palaces overwhelmingly garish and kitschy. 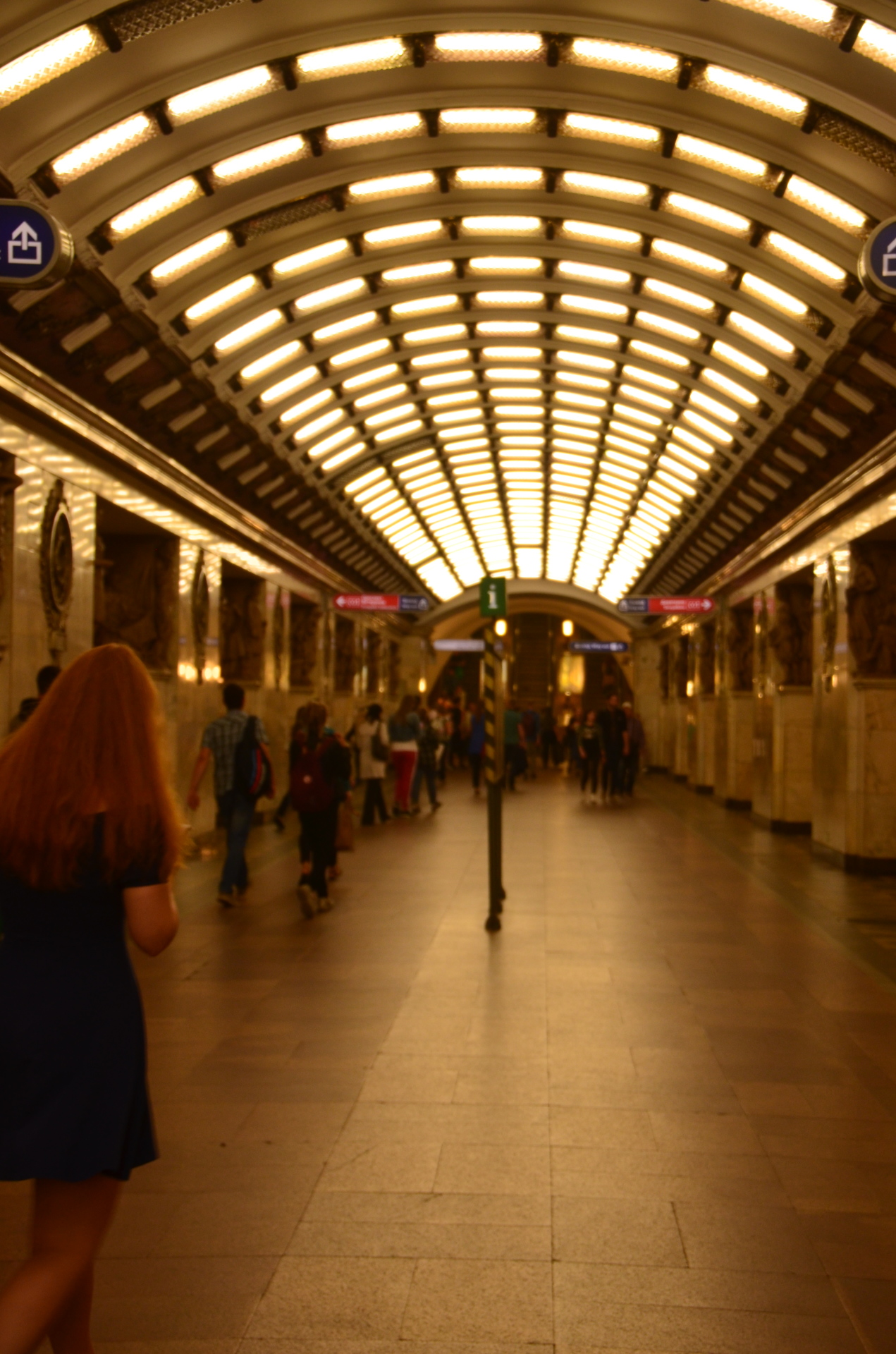 Let me just cut to the chase and tell you that St. Petersburg was one of the cleanest big cities I’ve ever seen. We all expected to see trash lining the streets and graffiti decorating the walls of buildings, fences, and the subway, but we found none of it. The subway stations were very clean, as were the trains themselves.  We did see a bit of graffiti in one area on the second day, but it was minimal.  Most Russians frown upon graffiti and consider it a desecration of historic sites and such.  There is, supposedly, a “street-art movement” in Moscow and St. Petersburg, but it must be in an area through which we didn’t travel. 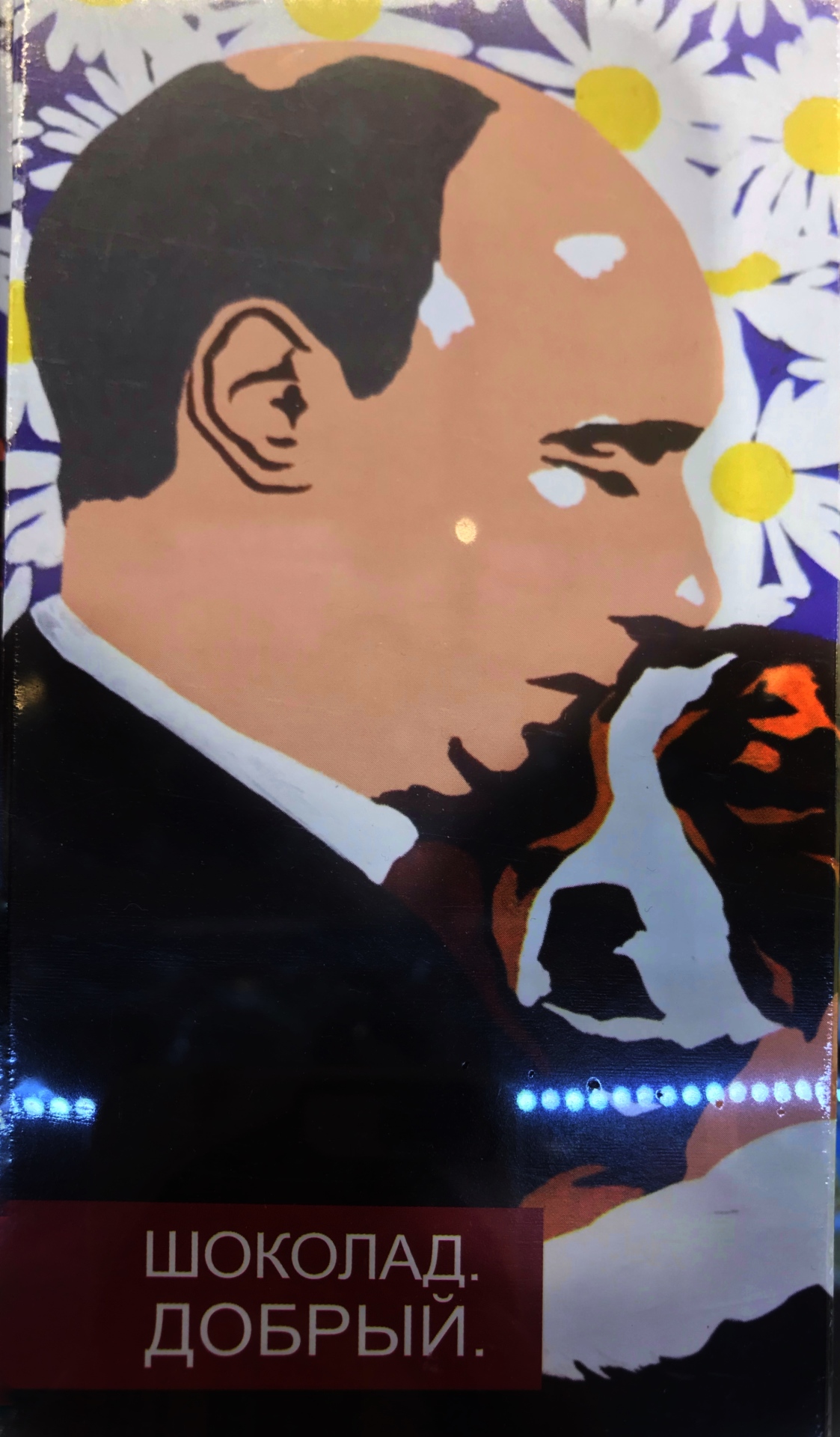 I expected to see Putin’s face everywhere, and on that point, I was completely correct. From the gift shops outside of passport control to the shops and kiosks that lined Nevsky Prospect (St. P’s main shopping street), Vlad’s face adorned everything from magnets and pencils to calendars, t-shirts, and chocolate bars (above).  Ugh.

Of everyone with whom I spoke, I am the only person who was less-than-excited about Russia.  I suppose that that is due, in part, to my childhood experiences with my grandparents, but I just never got comfortable there. Mike told me that he would like to go back, but he’d want to do it only if we could travel about freely and without a guide.  I’m happy I went, and the one time will suffice for me.